Fiction writers Katie Lattari and Morgan Talty are featured in the fourth event of the fall 2021 New Writing Series. The event, which is free and open to the (masked) public, is co-sponsored by the Honors College as part of their Honors 180: Cultural Odyssey.

Morgan Talty is a citizen of the Penobscot Indian Nation where he grew up. He received his BA in Native American Studies from Dartmouth College and his MFA in fiction from Stonecoast’s low-residency program, where he is currently on the faculty. His story collection Night of the Living Rez is forthcoming from Tin House Books (2022), and his work has appeared in The Georgia Review, Shenandoah, TriQuarterly, Narrative Magazine, LitHub, and elsewhere. Talty was recently awarded the 2021 Narrative Prize, and he is a recent recipient of a grant from the Elizabeth George Foundation. Talty teaches courses in both English and Native American Studies. He lives in Levant, Maine.

Katie Lattari holds degrees from the University of Maine and the University of Notre Dame. Her first novel, American Vaudeville, a small indie press work, was published in 2016 and had previously been a semi-finalist in Subito Press’s annual fiction contest in 2013. Her short fiction has been published in such places as NOO Journal, The Bend, Stolen Island, Cabildo Quarterly, Pennsylvania English, The Writing Disorder, and more. Her short story “No Protections, Only Powers” was a finalist in the Neoverse Short Story Writing Competition and later anthologized in Threads: A Neoverse Anthology. On September 14, 2021, her debut thriller Dark Things I Adore was published by Sourcebooks Landmark. Dark Things I Adore was an Apple Books best book of the month pick for September, has received a starred review from Library Journal, and was recently featured in the Crime & Mystery section of the New York Times Book Review. A native of Brooklyn, New York, Katie now lives in Bangor, Maine, with her husband Kevin, and their cat, Alex. 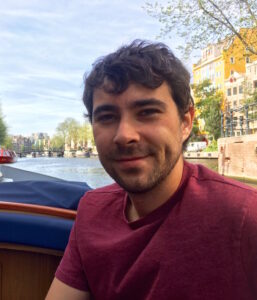 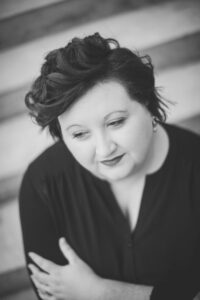 The UMaine New Writing Series was founded in 1999 and is sponsored by the English Department and the Center for Poetry and Poetics (formerly the National Poetry Foundation), with support from the Eaton Family New Writing Series Fund, the Lloyd H. Elliott Fund, the Milton Ellis Memorial Fund, and the Honors College. Grateful acknowledgment is made to the IMRC, and to donors Allen and Sally Fernald, for use of the Fernald APPE space.

If you have a disability that requires accommodation for a NWS event, please contact the office of Student Accessibility Services, 121 East Annex, 581-2319 (Voice) or 581-2311 (TDD).

The authors who appear in the NWS write for adult audiences and make use of a wide spectrum of language and subject matter. We are happy to advise parents and secondary school teachers about the suitability of specific events for their children or students. Just contact Series coordinator Steve Evans at steven dot evans at maine dot edu or at 207-581-3822 a few days in advance.

The University of Maine does not discriminate on the grounds of race, color, religion, sex, sexual orientation, including transgender status and gender expression, national origin, citizenship status, age, disability, genetic information or veteran’s status in employment, education, and all other programs and activities. The following person has been designated to handle inquiries regarding nondiscrimination policies: Director, Office of Equal Opportunity, 101 North Stevens Hall, 207-581-1226.