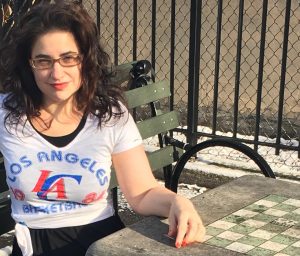 As part of her visit to campus at the end of February, poet and activist Lynn Melnick will lead a workshop on “Exploring and Dismantling Rape Culture” on Wednesday, February 27, at 4pm in the Writing Center. The workshop is co-sponsored by the Women’s, Gender, and Sexuality Studies (WGS) program.

Rape culture is the term for the environment in which sexual assault, harassment, coercion, and misconduct are ignored, diminished, and allowed to flourish without repercussion. Rape culture is rampant in the United States and around the world, and it very often originates from the very language we use to describe and define events and actions. From casual “rape jokes” traded among friends, to “boys will be boys,” to journalists calling the many assault and harassment allegations against Hollywood figures a “sex scandal,” to women being told they should appreciate street harassment—these everyday microaggressions and flat-out aggressions keep women and other victims from feelings safe, and often also keep them from achieving their career and personal goals.

In this workshop we will explore the many insidious forms that rape culture takes, and how we can arm ourselves and others with facts and with language to push back against what society keeps telling us is normal and not so bad.

NOTE: This workshop is for all genders! Men very much welcome!

Lynn Melnick is the author of the poetry collections Landscape with Sex and Violence and If I Should Say I Have Hope, and the co-editor of Please Excuse This Poem: 100 Poets for the Next Generation. Her poetry has appeared in APR, The New Republic, The New Yorker, The Paris Review, Poetry, and A Public Space, and her essays have appeared in LA Review of Books, Poetry Daily, and the anthology Not That Bad: Dispatches from Rape Culture. A former fellow at the New York Public Library’s Cullman Center for Scholars and Writers, she also teaches poetry at Columbia University and the 92Y, and formerly served on the Executive Board of VIDA: Women in Literary Arts, where she coordinated the #saferLIT initiative. Born in Indianapolis, she grew up in Los Angeles and currently lives in Brooklyn. Find her on Twitter: @LynnMelnick.