My current book project, provisionally titled Modernist Form: Literature, Fragmentation, and Possibility across an Episteme, explores the way in which fragmentation opens a space for imagining new forms of human relationality both in literature and in the various institutions and disciplines across western modernism more broadly. Chapters consider, for example, Ford’s Parade’s End and security/administrative governance, Woolf’s The Waves and physics, Faulkner’s As I Lay Dying and advertising, and Joyce’s Ulysses and finance.  In reading the form of fragmentation comparatively across these otherwise seemingly disparate domains, I argue that certain affinities pervade the form, or architecture, of knowledge constituting western modernism, which accounts for my turn to Foucault’s use of the concept episteme. What I posit more broadly, then, is that western, or transatlantic, modernism contains not only the dominant epistemological form of politics, culture, and being that is typically (and most explicitly) accounted for, but also an under-examined, or even under-recognized, form of being and relationality simultaneously existing alongside and within it.

My second book project, still in an early stage, will explore the concepts dynamism and energy in modernist fiction.  Much of the scholarly work on the relationship of these concepts to modernism focuses on poetics and visual art (such as vorticism and futurism), so I am interested in expanding this work to see how the concepts also function in narrative form. Specifically, how does modernist fiction take on certain notions of dynamism and energy that were cultivated in the physics of the late nineteenth and early twentieth centuries, as with research in thermodynamics and quantum mechanics? Building on the broader questions of my first book project, and given that Aristotle’s use of the Greek dunamis and energeia are often translated as “potentiality” and “actuality” respectively, I also ask what new forms of relationality and being are imagined in modernist fiction as a result of engagement with these concepts?

“Should We Justify the Humanities?: A Round Table with David Damrosch, Lois Zamora, and Marianne Hirsch,” ed. and intro. Michael Swacha, Comparative Literature Studies 51, No. 4 (December 2014), pp. 587-602.

“Narrative Form and the Relations of Being: Exploring the Intersection of Lacan, Adorno, and Henry James,” Modern Language Association, January 2020. 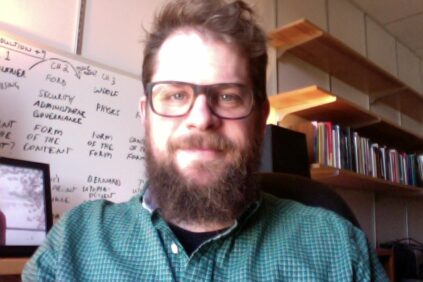