I am a medievalist with an interest in literature and the environment. I write about outlaws, landscape, and memory. After receiving my PhD in Medieval Studies from Cornell University, I have been teaching graduates and undergraduates at UMaine. Teaching and research interests include:

Dragonslayers from Beowulf to Wagner, Tolkien and Beyond
Shakespeare
Chaucer and Medieval Literature
Foundations of Literary Analysis
Honors Civilizations 111-212
Texts and Contexts: The Saga
Robin Hood and other Outlaws

The Nature of Story

CLASSES TAUGHT AT OTHER INSTITUTIONS:

Gods, Heroes and Monsters: Medieval Celtic Literature
Beyond the Round Table: Arthurian Literature, Medieval and Beyond
Viking Sagas: The Old Norse Epic
Under the Greenwood Tree: The Robin Hood Legend, from Medieval to Modern
Midsummer Night’s Weirdness: Seasonal Literature in the Middle Ages and Renaissance
The Personal Essay
Medieval Romance: Voyages to the Otherworld
Body, Mind, Health: Perspectives for Future Medical Professionals 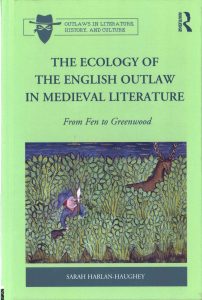 “The Dragon of Love: Chaucer’s Jason and the Cycle of Consumption in the Legend of Good Women” will appear in The Chaucer Review 57.1 (January 2022).

“The Poached Feast and the Kingly Blow: The question of courtesy in late medieval king-in-disguise narratives” Co-written with Melissa Winders. In Food and Feast in Premodern Outlaw Tales, edited by Melissa Elmes and Kristin Bouviard-Abbo. Abingson: Routledge, 2021, 169-198.

“The Broken Bird: Note on the unsolved mystery of the loon’s name.” Spire, the Maine Journal of Conservation and Sustainability 1, May 4 2017, online.

“Forest Law through the looking glass: distortions of the Forest Charter in the outlaw fiction of late medieval England.” William and Mary Bill of Rights Journal. 549, 2016, pp. 549- 589. https://scholarship.law.wm.edu/wmborj/vol25/iss2/8

I am on the Board of Reviewers for the Year’s Work in Old English Studies. As a reader in the section “I. General and Miscellaneous”, I review approximately 10-15 books and articles a year.

In The Medieval Review 15.02.02, a review of Bintley, Michael D. J., and Michael G. Shapland. Trees and Timber in the Anglo-Saxon World. Medieval History and Archaeology. Oxford: OUP, 2013.

In The Medieval Review 14.04.10, a review of Fletcher, Alan J. The Presence of Medieval English Literature: Studies at the Interface of History, Author, and Text in a Selection of Middle English Literary Landmarks. Cursor Mundi, 14.  Turnhout: Brepols, 2012.

“Down with Dante and Chaucer? Navigating a Great Books curriculum as a medievalist.” Ballad of the Lone Medievalist, ed. Kisha F. Tracy. Brooklyn: Punctum, 2018.

“Up the Hill Backwards: Meeting the Challenges of Creating a Humanities Lab” in Continuity and Innovation in Honors College Curricula, eds. Robert Glover and Katherine O’Flaherty. Lanham: Rowman and Littlefield, 2016.

“Blood on the Table: The Subversion of Fellowship in the Gest of Robin Hood.” Will appear in New Readings of Medieval Robin Hood Rhymes, an edited volume in the Outlaws in Literature and History Series, edited by Mikee Deloney and Perry Harrison. Routledge. Forthcoming 2020.

“Living on Borrowed Time: the temporal aesthetic of the Outlaw Sagas.” Will appear in Time, Space and Narrative in the Icelandic Sagas, edited by Emily Lethbridge. Brepols. Forthcoming 2020.

“Charms, Changelings, and Chatter: sonic magic in the Secunda Pastorum.” Will appear in The Language of Magic, edited by Eleanora Cianci, forthcoming 2021.

Layamon’s Necropoetics: Death, Landscape, and Poetry in the Brut. Book project in progress.

“Spare not the Venison: Machismo and Conspicuous Consumption in the Late Medieval Rymes of Robin Hood”

“Haliurunnas, Helrunan, and Grendel’s mother: on the unbearable loneliness of Trollwomen” Cowritten with Thomas D. Hill

“The Lady and the Tramps: The Collision of Homosocial Bandit Culture with the Outlaw’s Wife”. At “Ballads and Bandits”/ Irish Conference of Folklore & Ethnology”, in Dublin, Ireland, December 10-11 2019.

“Charms, changelings, and chatter— sonic magic in the Second Shepherds Play”, At “The Language of Magic,” at the 12th international interdisciplinary conference on Charms, Charmers, & Charming, in Pescara, Italy, May 22-24, 2019

“Monty Python’s Medievalism.” A Pre-show (Spamalot) talk at the Collins Center for the McGillicuddy Humanities Center, February 6, 2019, Orono, ME.

“Conspicuous Consumption, Masculinity, and Nihilism in the Outlaw Feasts of the Late Medieval Greenwood.” At the Leeds International Medieval Congress: “Ecocritical outlaws in Medieval English Literature,” July 4-7, 2016, in Leeds, UK

“Forest Law Through the Looking Glass,” At Bill of Rights Journal Symposium: “After Runnymede: Revising, Reissuing, and Reinterpreting,” March 18, 2016, in Williamsburg, VA