Poet, Translator, and Scholar Pina Piccolo in NWS This Wednesday

The spring 2019 New Writing Series kicks off with a special Wednesday afternoon event featuring Pina Piccolo in our usual venue (Allen & Sally APPE Space, 104 Stewart Common). The event is co-sponsored by the Honors College as part of their Honors 180: A Cultural Odyssey and will be hosted and introduced by Carla Billitteri (flyer attached).

Pina Piccolo is a poet, translator, and independent, scholar born in California and educated at Berkeley (Ph.D. Italian Literature). She moved to Italy in 2003, where she participated in the creation of La Macchina Sognante: Contenitore delle Scritture del Mondo, an online journal of literature and culture that presents marginal and dissident writing from across the world. She is presently the coordinator and curator of the English language version of the journal, The Dreaming Machine. Her poems have appeared in anthologies in Italy and the U.S., including Rondini e ronde—scritti migranti per volare sul razzismo (Mangrovie Edizioni 2010), Cuore di preda (CFR Edizioni, 2013), Sotto il cielo di Lampedusa, I and II (Rayuela 2013, 2014). Her scholarly essays on Dario Fo and Franca Rame have appeared in Italica and Forum Italicum, while her essays on Gianni Celati and Luigi di Ruscio have appeared in Gradiva, Italian Quarterly and the American Journal of Italian Studies. Her collection of poems I canti dell’Interregno was published in Italy by Lebeg Edizioni in 2018.

On Saturday, February 16, a gala reading in honor of Edna St. Vincent Millay will be hosted by poet and UMaine faculty member Kathleen Ellis. The event will be held in the Farnsworth Art Museum Library starting at 2pm. English majors, minors, and graduate students who are interested in attending should contact the Department (english.chair@maine.edu) by Wednesday, February 13, for information about complimentary tickets (normal cost is $10).

As part of her visit to campus at the end of February, poet and activist Lynn Melnick will lead a workshop on “Exploring and Dismantling Rape Culture” on Wednesday, February 27, at 4pm (room to be announced). The workshop is co-sponsored by the Women’s, Gender, and Sexuality Studies (WGS) program.

Rape culture is the term for the environment in which sexual assault, harassment, coercion, and misconduct are ignored, diminished, and allowed to flourish without repercussion. Rape culture is rampant in the United States and around the world, and it very often originates from the very language we use to describe and define events and actions. From casual “rape jokes” traded among friends, to “boys will be boys,” to journalists calling the many assault and harassment allegations against Hollywood figures a “sex scandal,” to women being told they should appreciate street harassment—these everyday microaggressions and flat-out aggressions keep women and other victims from feelings safe, and often also keep them from achieving their career and personal goals.

In this workshop we will explore the many insidious forms that rape culture takes, and how we can arm ourselves and others with facts and with language to push back against what society keeps telling us is normal and not so bad.

NOTE: This workshop is for all genders! Men very much welcome!

Call for Submissions to Thieves & Liars

We are excited to announce that we will be publishing a literary journal this spring, Thieves and Liars, a compilation of writing from graduate students. The first step of having a journal is having writing to publish. That is where all of you come in!

We are looking primarily for fiction, poetry, and creative non-fiction. That being said, as editors (and humans) we are open-minded. Send us your drawings and jottings (black and white, please), your diary entries, your essays on Lady Gaga or Lady Macbeth, what have you. We will read and respond to all submissions.

We also hope to interview the writers in the New Writing Series as they come on campus, so if you have an interest in conducting these interviews, let us know.

Please limit your entries to 12 pages for prose, and 5 pages for poetry.

Please e-mail your submissions to martin.conte@maine.edu and/or victoria.hood@maine.edu by Sunday, March 17th (don’t worry, we will be checking in a few more times to remind you of this deadline). We are capable adults, but not IT masters, so please restrict your submissions to word docs, for our sake. If your submission requires a weird format, just let us know in the body of the e-mail.

The Stephen E. King Chair in Literature, in partnership with the Women’s Resource Center, sponsors “Dine in Discourse: White Like Me” on February 19, 2019, at 5:30pm in the Bumps Room, Memorial Union. The event features free Chinese food, a film screening, and an opportunity to discuss “white privilege and the importance of anti-racist work” (flyer attached).

On Friday, February 22, several UMaine faculty, including Carla Billitteri, will join Professor Jahan Ramazani for a panel on global poetries and the “cosmopolitan sympathies” excited in the wake of the First World War. The discussion in the Bangor Room of the Memorial Union at 2 pm will be stimulating to anyone interested in poetry, globalization, and the history of art and ideas.  Professor Ramazani is a distinguished scholar of modernist and postcolonial poetry in English at the University of Virginia.

On Thursday, February 28, poet, essayist, and editor Lynn Melnick reads in a New Writing Series event hosted by Jennifer Moxley. The event will be held at 4:30pm in the Allen and Sally Fernald APPE Space, 104 Stewart Commons.

On March 1, the Stephen E. King Chair Spring Lecture Series opens with a talk by television producer and writer Adam Barr titled “Made for TV: Writing to Keep Hollywood Relevant.” The event will be held at 4:30 in the Wells Conference Center. Barr will also lead a “TV Writers’ Room Workshop” on Saturday, March 2, from 1-4pm. The event is open to members of the UMaine community interested in media, performance, writing, and entertainment. For more information about the workshop, please email King Chair Caroline Bicks.

This Week in English 47 was sent to faculty, students, and friends of the department on Monday, February 11, 2019. If you would rather not receive these weekly bulletins, please reply with <unsubscribe> in your subject line. Earlier installments are archived on our website.

If you would like to support the mission of the English Department, please consider a donation to the Annual Fund through this secure online portal. 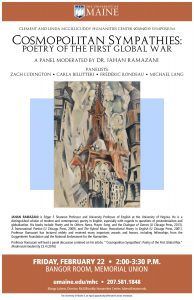 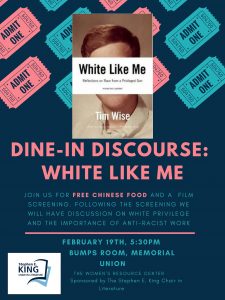